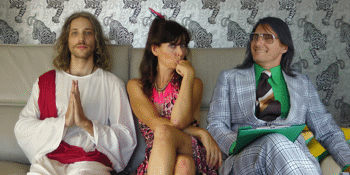 It’s going to be a night of seriously infectious grooves at Vinnies on Thursday 24 June
when local three-piece Super Massive launch their dance-inducing disco track ‘I Like It’
with seven-piece soul-funk outfit HEAVY WAX as their special guests.

With venue capacity reduced for physical distancing, tickets are limited! Super Massive’s
last shows sold out so get in quick. It’s going to be a fun and entertaining night.

Super Massive have released an EP and seven singles to date, and toured venues and
festivals in Australia and Asia for over seven years, to hot ticket recommendations and
repeat airplay across the country as well as in the US, UK, Germany and Mexico.

Latest single “I Like It’ has a hilarious videoclip that is a must-watch (View here). The single has
been released together with by some cheeky merch - a limited edition run of glittery
Super Massive and I Like It underpants, available through the band’s Bandcamp page.

Recently-formed Gold Coast seven-piece roots group HEAVY WAX come hot off the pan
ready to serve up their high-energy, rock-soul-funk-reggae mash. Although in their
infancy, they already have a discernible raw sound emerging. Featuring a brazen three-
piece horn section they reference eclectic mixtape compilations and sounds of the ‘pre-
digital’ era to inspire their creativity.

HEAVY WAX have released four singles in a short space of time, with most recent track
Clementine getting a run on Double J. They recently played closing set on the Victoria
Park Stage at Blues On Broadbeach. For those in search of hi-fidelity music with feeling,
solid beats and that extra punch only a horn section can deliver, these guys could just
be your new favourite band.