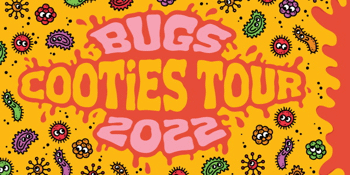 with special guests
Vinnies Dive (Southport, QLD)
Wednesday, 6 July 2022 7:00 pm
10 days away
18 Plus
Australian Artists
Music
Indie
POP
Punk
Send this event to
Bugs are no longer reserved to the confines of the Brisbane scene in which they made their start, with a whirlwind couple of years shepherding the band and their heartfelt, honest and relatable brand of pop rock to the national stage. Today, the trio share their latest single ‘In The Middle (Of It)’, which will be lifted from their brand new album Cooties, out Friday 25 March.  The band are also super pumped to announce their Cooties Album Tour will kick off in April, encompassing 17 dates in just over a month and is shaping up to be an energy packed tour. Tickets are on sale Wednesday February 9, more info available HERE. Frontman Connor Brooker explains the theme behind ‘in The Middle (Of It)’ “It’s a yearning track about feeling like you’re always the second option for someone. The to and fro internally while trying to figure out where you stand with someone can be so confusing, it’s kind of just an internal dialogue I had while being effectively lead on by someone already in a relationship.” Bugs’ 10-track album Cooties lands 25 March and features previous singles ‘Old Youth Feeling’, ‘Diamond’, ‘Decisions, Commitments & Plans’, alongside latest single ‘In The Middle’ (Of It)'.  “We started refining a batch of around 30 songs during the middle of 2020 and given the wealth of time w/ lockdowns managed to record most of the final tracks at Brock’s home studio. He engineered the release from scratch, Jordan and I put down some parts at our own houses that ended up staying in a few final mixes. But basically the bulk of the hard work and production was done by our drummer Brock Weston,” describes Connor.  He goes on to explain the story behind the album, “I wrote most of the songs between 2019-2020 and as the obvious gems worked their way onto the final track listing the theme of the album came together. It’s all about coexisting realities, relationships in your twenties, finding your place in the world. I’ve gone through pretty drastic and destabilising change at times and I guess it’s representative of a lot of personal experiences over the last few years. Some of the songs are pretty sad, some are full of angst, others unbridled joy. It’s a polarising mix of music because life isn’t as linear as we’d often like it to be.”  To celebrate the announcement of Cooties the band are giving away a customised Fender Squier Affinity Telecaster Deluxe, painted by local artist Aidan Ryan who has created the majority of Bugs artwork in the past, including forthcoming album, Cooties.  It’s been one wild ride for the trio so far, having already toured with the likes of Grinspoon, Mallrat, WAXX, TOWNS, Sweater Curse and The Hard Aches as well as appearing on festival line ups including Falls Festival, Yours & Owls and The Hills Are Alive. The band have also received praise from outlets such as Rolling Stone Australia, Tonedeaf, Pilerats, NME, Mixdown, Music Feeds, Pilerats, The Guardian, Spotify and triple j.  It’s time to strap in and enjoy the next musical ride from self-professed “Noisey Guitar Pop from Sunny QLD” band, Bugs.